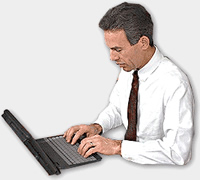 
Words per minute is a measure of typing speed, commonly used in recruitment.

Words per minute is also a measure of a telegraph or amateur radio operator's Morse code speed. Since the codes for different letters differ in length, one needs to specify a reference word. A commonly-used reference word is "PARIS".

For the purposes of WPM measurement a word is standardized to five characters or keystrokes. So, "fifth" counts as one word, but "fifteenth" counts as two.

Someone having minor experience with keyboards can reach 20 words per minute, an average typist reaches about 30 to 45 (usually the minimum required for dispatch positions and other typing jobs), while advanced typists work at speeds above 60. As of 2005, Barbara Blackburn is the fastest typist in the world, according to The Guinness Book of World Records. Using the Dvorak Simplified Keyboard, she has maintained 150 wpm for 50 minutes, 170 wpm for shorter periods of time, and has been clocked at a peak speed of 212 wpm. Blackburn failed her typing class in high school, first encountered the Dvorak keyboard in 1938, quickly learned to achieve very high speeds, and occasionally toured giving speed-typing demonstrations during her secretarial career.

A less common form of finding the speed of a typist, the acronym: CPM is used to identify the number of Characters Typed Per Minute. This measurement is not a common measurement of speed considering the difference between typing in different languages. This is a common measurement for typing programs, or typing tutors, as it can give a more accurate measure of a person's typing speed without having to type for a prolonged period of time. Also used occasionally for associating the speed of a reader with the amount they have read.